The Controversial History of Tango 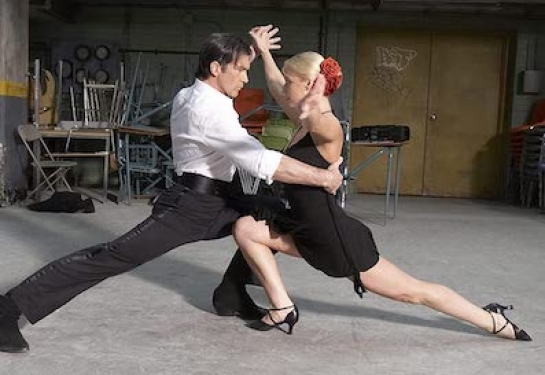 Image from 'Take The Lead'

The Tango often stands out from the other Ballroom dances due to its passionate, flirtatious style and sharp staccato movements.  It is easily identifiable in films and tv shows that often exaggerate these characteristics to create drama and anticipation between the characters.

In modern ballroom dancing, the Tango has become much more about quick feet and sharp body actions. Tango is now accepted both in society and on the competition floor, despite its colourful and scandalous history!

The Tango is generally considered to have begun around the late 1800s to early 1900s, strongly influenced by Cuban, African and Italian immigrants arriving  in the poorer barrios (neighbourhoods) of Argentina.

This style was primarily created in the back-alley bars, clubs and questionable dance venues, as well as on the streets of Buenos Aires. Due to its roots, Tango became a way for the overcrowded male population to impress the ladies, who were happy to accept the offer of a dance, whilst also searching the gentleman’s pocket for any money he might have with him! Unsurprisingly, it was not considered socially acceptable by the upper classes in Argentina.

This melting pot of nationalities and their cultures combined traditional Argentinian milonga rhythms with Cuban habanera music to create a fusion of styles, each borrowing from the other. Tango became an impromptu dance that could be enjoyed with anyone without prior discussion.

By the start of the 20th Century, Tango was embraced by the younger generation and throughout the rest of society. It soon spread to provincial towns of Argentina and across to Montevideo, the capital of Uruguay, where it became as much a part of the culture as it is in Buenos Aires.

In the early 1900s, the sons of the upper classes introduced the dance to Paris, the cultural hub of the world, where it spread like wildfire. The city, looking for new inspiration even welcomed the risqué nature of the dance, especially with it being taught by handsome, rich Latin boys.

The Tango of Today

Today, there are several styles of Tango, including the Argentine Tango, American Smooth Tango and International (Ballroom) style Tango. Tango is easily identifiable at dance halls and on our tv screens due to its strong walking actions, impressive footwork and passionate performance. Films that include the Tango are: The scent of a woman, Take the lead and even Mr & Mrs Smith.

More in this category:
How to Improve my Technique as a Beginner/Improver Dancer
Regency Dance Awards: The Results »